So it took less than a day for some Christians to begin to point the finger at the “other”, blaming them for the Boston Marathon bombing. Here is one by “Christ Follower” , “Outspoken Conservative”(like Jesus, I guess), and very proud that she is blocked by several public figures (I can only imagine it has something to do with her loving people unconditionally, like Jesus)

Shannon Catoe ‏
@Anton_IIr  MA is one of the most Godless states in the Union. As a state, they tell God to get out. I’m afraid He complied.
Members of Westboro Baptist Church also considers themselves “Christ Followers”, and Bryan Fischer from American Family 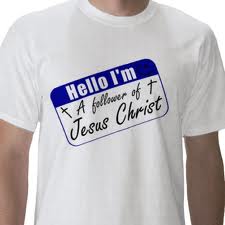 Association, who in the last week said that Christians are going to be forced to wear a patch like the Jews in Germany, so we can be identified as bigots. Benjamin Curell, the person mentioned in my last post, destroyer of a Planned Parenthood office is also a “Christ Follower”.
So, what does a Christ Follower look like.
If I were to combine the examples above, with other outspoken Christians in media and in politics, this would be the picture I would formulate…
A Christ Follower (thus mirroring the Jesus they claim to follow) is intolerant of and hateful toward Atheists, Muslims, Catholics, single  women, single pregnant women, women in general, people in the LGBT community, Native Americans. and other minority groups  They and therefore, their Jesus,  blame poverty on the poor trapped by it , and accuses those in poverty as being lazy, and parasitic, living off the money of the godly. This ‘Christ Followers” Jesus is apparently on the side of Republicans, against Democrats, and protects the assets of the wealthy and large corporations. He also has endowed His followers with the insight to read and know the hearts of people they hate, like the President, and the wisdom to interpret every natural and man-made disaster as a judgement of God against the godlessness of our culture. These Christ Followers have also been given a mandate to “take-back America” for God and in the process turn the nation into a Christian stronghold with all laws, regulations, and morality to be based on a their narrow (but right) interpretation of all Scripture.
This is the christ that these “Followers” show to the world.
But this christ is not Jesus.

in search of shalom

A messy journey towards peace and wholeness

Godinterest Christian Magazine is dedicated to proclaiming Christ and set apart, to save and empower lives.